Discussions on GFL SDK, the graphic library for reading and writing graphic files

The plugin is based on the GFL SDK, a component for decoding various images which was written by Pierre E. Gougelet, the creator of the XnView image-viewer.

The plugin adds support for the ‘HDR’ format, which I know a several people have requested over the years. For a list of the (many) other formats, and further discussion of the plugin, see this thread at the Opus forums:

ZwickySoft ([url=http://www.zwickysoft.com/products/opus_plugins/dvp_ugv.htm]Universal Graphics Viewer (UGV) plugin[/url] for Directory Opus) wrote:Directory Opus is a file manager for Windows. It includes thumbnail support and allows viewing various file formats within the program. The number of supported formats can be extended through a plugin system.

This plugin utilises the excellent GFL graphics library to provide support for 161 formats (including HDR. NOTE: some formats are already supported by Opus). It supports thumbnails, the Viewer/Viewer Pane, and conversion from any of the supported formats.

How does usage of GFL SDK by Directory Opus comply with restrictions mentioned in SDK's ReadMe.txt?

Restrictions: You may not use the Software (GFL SDK or GflAx) to create components or controls to be used by other developers without written approval.
The product developed should not be similar to or should not compete with XnView/NConvert (should not be a graphic viewer or converter).

It's not for creation of viewers.
Top

I'm fond of both and know both have been developped by the same person, whom I contacted for a few details. SimilarImages is of great use and yet no other program is able to achieve what it does - sadly the developer won't give out any sources to let me fix a few bugs, but I was able to at least modify its windows to be more effective/useful.

I use GFL SDK in at least two non-public programs and one generic project: So far GFL SDK has been of great use over all the years, and I use it since 2010. And before that time I most likely used software which included it as well.
Top

As SageThumbs is a Windows Explorer context menu extension, there is no an executable file that you should launch to bring it up. To use it, just open any folder with image files in Windows Explorer, and then right-click a file you want to preview. You'll see the thumbnail immediately in the context menu. 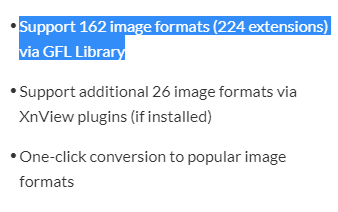