After using XnView MP a while, just browsing around images back and forth (have not found any single way to reproduce it) parts of the window goes black and software is unusable until restarted. 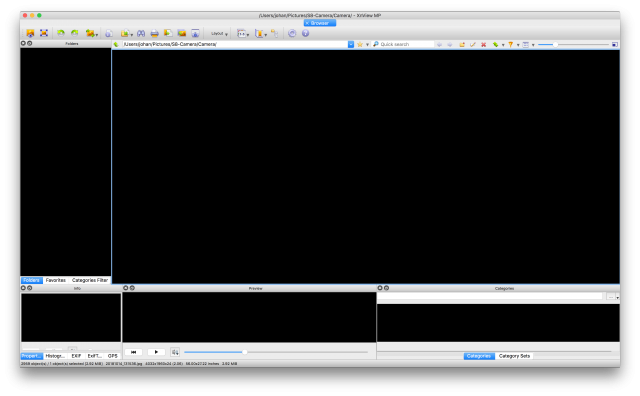 and you had it more than once?
Pierre.
Top

sorry did not get a notification about the response :/

Yes, the problem persist. Not sure on that Macbook pro, don't use it there as often as on my other Mac but I always, and still have the issue on my desktop running MacOS High Sierra 10.13.6, on a NVidia GeForce GTX 970. Never had any other graphics glitches in any other apps.


Today running with 0.93.1, and while just sorting, previewing and moving around files, nothing advanced, the UI hangs every now and then. Sometimes it goes black, sometimes it just stops updating the views. For example, in some case the scrollbar in browser showed movement, but the actual thumbnails/files where frozen.

During this mornings session I think I've had to restart it 10 times or so.. :/ While it's quick to restart, it's quite a bit of irritation.
Top

do you have played video file?
Pierre.
Top

If I had played video file as part of browsing? Yes, there have been some video files present in the different directories. Tried to reproduce just now by moving around in a directory with zero video files, and it never showed the problem. Moved to another directory which did have video files, and after a while it showed up.. But I would not draw any definitive conclusions from this.

In general, it was a bit tricky to reproduce it today.. I'll try to see if I can reproduce it quicker/more reliably on my laptop later today.

While talking about video files and preview, if I move around the browser window and pressing left/right arrow, when hitting a video file it automatically starts playing in the preview (as expected). If I move to the next file, and it is a video, that one starts playing instad. But, if the next file happens to be a picture instead of a video, the video seems to continue playing in the background. The preview shows the newly selected image, but the audio from the video is still playing in the background. Might very well be some bug report on this already, haven't searched!
Top

I know that there is some strange problem with video playing
Pierre.
Top

FWIW, Qt 5.10 and up are supposed to have a ton of fixes for HiDPI display and GPU rendering issues, which might be related. XnView is currently on 5.9; now that there's a 5.12 LTS tagged that might be the way to go.
Top