I've been trying to figure out how to set a keyboard shortcut in XnView that does the same but so far I haven't been successful. I figured out how to set the arrow keys to scroll slowly (in mini steps) but this is far from optimal. Does anyone have a solution?
Top

Thanks for replying. In "Settings > Interface > Keyboard" I can set up the arrow keys to scroll as I said previously, but it scrolls very slowly (in mini steps). Is there a way to increase the amount of steps it scrolls per key press?
Also, I've looked through the list of all the keyboard shortcuts in "Setting > Interface > Shortcuts" but haven't found one to scroll quickly or in chunks.
Top

no way but perhaps i can use Arrow+shift to quick scroll?
Pierre.
Top

Jorge24 wrote:In "Settings > Interface > Keyboard" I can set up the arrow keys to scroll as I said previously, but it scrolls very slowly (in mini steps). Is there a way to increase the amount of steps it scrolls per key press?.

xnview wrote:no way but perhaps i can use Arrow+shift to quick scroll?

Or possibly add Page Up and Page Down optionts to Tools > Settings... : 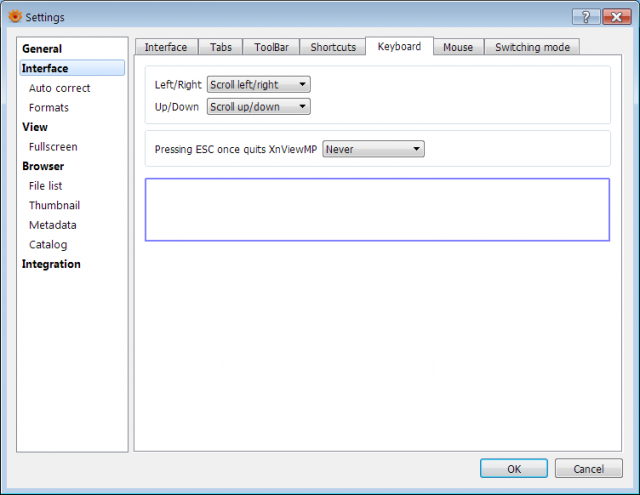 Those are both great ideas! Would love if you do implement either of them, although making it a customizable keyboard might be the best so everyone would be happy

I'd also love to have such a feature. Keyboard scrolling an image is really slow compared to XnView Classic.

Quite some time ago I made a suggestion (disguised as a bug report) to Pierre to have an shortcut for fast image scrolling, just like in XnView Classic. Eventually it got added to XnViewMP with v0.88. These keyboard shortcuts are hard-coded and cannot be changed, hence they aren't listed in the shortcut configuration dialog.

deus-ex,
Much better, thank you! Are those default keyboard shortcuts documented somewhere?

Here's a XnView (Windows) User Guide. This Guide is available as a Reference Manual (PDF) for download. At first glance though the shortcut list appears to be incomplete, for example the "fast image scroll" shortcut is not listed.

IMHO it's rather difficult to see through XnViewMPs keyboard shortcut system. Several pre-defined shortcuts cannot be changed at all, some have only a limited set of bindable functions to chose from and are located at a different region of XnViewMPs configuration dialog. For example, the SPACE key is located in the Interface section under the TAB Keyboard.

The introduction of the fast image scrolling keyboard shortcut is mentioned in the file WhatsNew.txt at line 1231. Actually the shortcut was introduced first with v0.87, but it wasn't quite working like in XnView Classic. So I made sure it got improved/fixed, which found its way into release v0.88.
Best regards,
deus-ex
Top