Okay, is it already there?
lately i've been asking for stuff that was already there so this time i'm directly asking if i can't see the obvious again.
Top

bdragon wrote:Okay, is it already there?
lately i've been asking for stuff that was already there so this time i'm directly asking if i can't see the obvious again.

You try the Filter > Reduce noise action, although the setting isn't adjustable, and I have no personal experience of using it; you might also if necessary test some of the other filter options, although it seems unlikely any would actually be useful...
Top

it appears to work only on very low resolution scans/pictures, and the appearance chance is not very noticeable. I don't know f this is intentional to avoid unditting "i"s

bdragon wrote:it appears to work only on very low resolution scans/pictures, and the appearance chance is not very noticeable. I don't know f this is intentional to avoid unditting "i"s

Commercial OCR software generally have despeckle functions as does Nuance PaperPort, which could be a lower cost route to obtaining the function if you don't need heavyweight OCR.

If you are comfortable using the command line, the obvious answer is ImageMagick which supports despeckle in its very extensive function set.
Top

First: this is the forum for XnConvert. I already knew about those softwares, i was asking specifically of this.

Also what i ask is not "making coffee" or other things unrelated to the scope of the original software. So it might already be there as it happened with several requests i asked in the past, only i did not know they had different names.

Yes i don't scans extensively, only about once or twice a month.

And i'm generous in the use of the "scan" word. Half of that is just cleaning with GIMP "pictures people have taken of printed words" which yeah they are some vague sort of a scan but i'm not going to insult scanners in saying those are scans.

But i like what little i actually do "scan" to be rather neatly contrasted, devoid of useless borders and deskewed.

XnView and XnConvert already do the vast majority of that as i slowly learned.

Now i just changed printer. It's an office printer, A Ricoh Aficio MP 2000. Old. Used. And refurbished. Basically very fast, very cheap can print and scan A3 and sold at one third of the price. However. While this "new" one is much faster, as expected of a printer for an office... whatever i scan does not seem to come out "cleaned". There seem to be countless microscopic imperfections which prevent such useful features as "auto-crop" to work in any fashion.

Apparently is toner build-up on the other side of the scanner glass, and whatever i do does not appear to come off. Yes this includes removing the glass and going there with a solvent. Also it's too dark for normal "threshold" with the autocrop. I'm attaching a picture of a scan.

So yeah. I could say i've wasted 500 euros on a printer which is fast but gets its scans all dirty because i was cheap... or i could use several softwares on a batch process to do all the sequence of works... or... well... i thought that there was a forum, that this software was made to do batch processes and i could ... you know... ask? 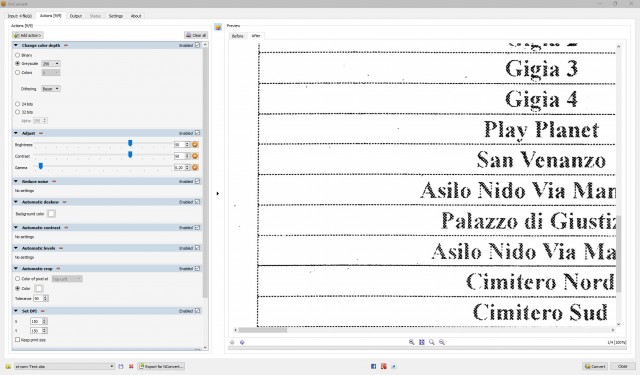 Median as well as Minimum/Maximum filters are available in XnConvert and can also be used for removing noise.
Top

I noticed a halftone or dither pattern in your screenshot.

I also downloaded the TWAIN driver for the Ricoh Aficio MP 2000 and extracted the help file: In the Quality Settings, there seems to be an Erase Background option “for scanning newspapers or documents printed on colored paper, since it removes some background texture”. 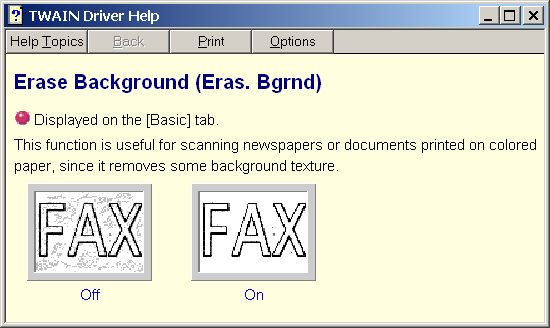 First of all thanks for going so indept.

Sorry, but since i have a disability i cannot have a printer in the same room with me. It's... well let's just say the doctors said i can't have many more pieces hacked away and so anything as cancerogenous as a laser printer has to be in a different room, possibly with a large window that has to be open whenever i want to start using the printer. (which, incidentally, is also why i tend to have sooo many "scanned" pictures which are just pictures of a page taken by phone).

So yes, the one thing i liked about this printer that made it so fast was that i could just scan without using the PC and it would save to the NAS next to it. Which meant i would just have to go there once, set the pages, tell it to scan, and then i would find the pages slowly working their ways into the NAS.

Basically i have a room for me and a completely different room with the printed archive i use for work and the printer. So yes. This is also why, while i do have the TWAIN driver installed, i haven't used it yet.
Top

bdragon wrote:It's... well let's just say the doctors said i can't have many more pieces hacked away and so anything as cancerogenous as a laser printer has to be in a different room, possibly with a large window that has to be open whenever i want to start using the printer.

So you've set up an unattended scanning system using an automatic document feeder and your NAS, bypassing the TWAIN driver. Unfortunately, that Erase Background is done by the software and seems not to be available in the firmware.

Could you please try applying the action for removing the speckles (Reduce Noise) before dithering (Change color depth)? I believe this would yield better results.
Top

here's my latest configuration version for XnConvert when "cleaning" scans. the greatest differences i did find in the past was moving the reduce noice below normalize EX or adjust brightness. But even then in general i did find little difference. I don't know the algorithm for "reduce noise" but seems to work best on very low res. The scans i was working on right now were about 9500x6500 originally A3 scanned pages, then auto-cropped to their borders.

Also, while normally i don't use this for work i appreciate the help and since this specific scan was for work i'm buying XnView MP right now. XnConvert requires only a donation... and i don't like how much information the guys want just to send me to my paypal.
Top

bdragon wrote:Also, while normally i don't use this for work i appreciate the help and since this specific scan was for work i'm buying XnView MP right now.

Pierre will be glad to hear that

It's mainly aimed at removing ISO noise, I believe. A dedicated despeckle filter would sure be appreciated by a lot of users, especially for batch processing.