Offset window, nr and position of indicators below sliders depend on image size

Offset window, nr and position of indicators below sliders depend on image size

In the Offset window, the number and locations of the small indicators (vertical lines) under the Offset X and Y sliders, depend on the image size.

Effect:
Visual bug
The slider indicators seem to be broken, since they sometimes (depending on image size) appear in strange locations.

):
499px or less
There is only one small vertical line below the Offset X and Y sliders,
below the left most position of the sliders. 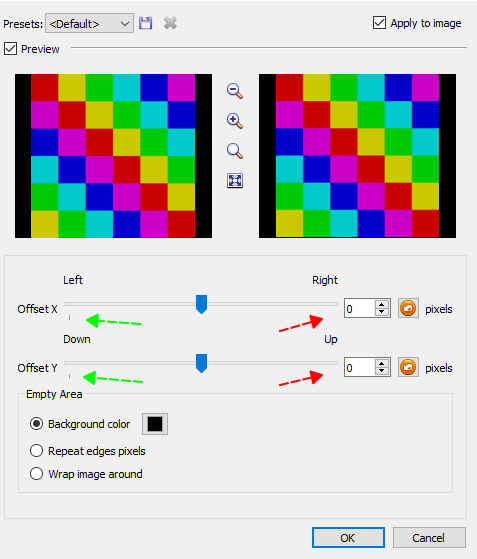 500px
There are two indicators, left and right most position.

550px
Two indicators, left most position, but now the right indicator is offset from the right.

900px
Two indicators, left most and right of center.

3333px
Seven indicators, left most, the rest are evenly spaced but none of them are at the center or at the right most position.

Expected behaviour:
I'm not sure how many vertical lines there should be below the sliders,
but if there's one at the beginning, then there probably should be one at the end.

It's easy to reset back to the center with the button to the right of the slider,
or by scrolling until the input box shows 0, or by typing 0 in it.

But it might still be good to have a center indicator, then one can see visually that one is close to the center.
Top
Post Reply
1 post • Page 1 of 1