What does have in common Google, Windows Server till the latest one (2012 R2 which will be released in few weeks), BibleWorks, Copernic Desktop Search and Lightroom & Co?

Hint: No, it isn't that each one of them has more than 4 million users.

It is the way in which they use their indexing engine, their catalog.

What's funny, is that XnViewMP has already the catalog exposed in Tools | Settings | Cache Maintenance...

- We need the catalog in a separate Catalog Window (eg. a menu entry in View | Catalog...) in order to be more accessible for common users.

- We need the catalog in a tree form in order to see more clearly the space occupied / number of fies for each branch and to remove more intuitively the entire branch by pressing the 'Remove' button. (implementation details upon request)

- We need a way to quick search in this catalog! A simple edit box which will issue a SQL like Select FolderID, Folder from Paths where Folder like "%foo%"; thing which will instantly (real time) find any directory which contains 'foo' inside. This is very very very important: we will have a real-time search over our folders without the need of having Windows Indexing Service kicking in now and then. Also if we're geeks we would implement also here the same AutoComplete engine described here: http://newsgroup.xnview.com/viewtopic.p ... 83#p112840 (Details upon request).

- This Catalog Window should have as root the name of the database because in the future (who knows?

) we can have multiple data stores / Catalogs. See how ASP does it: 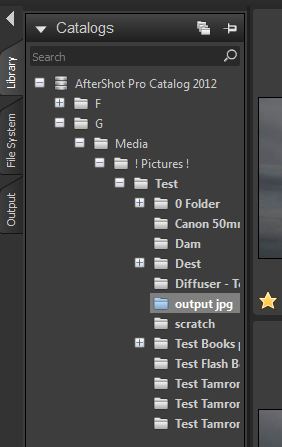 - This Catalog Window should provide the possibility to be called as a function from the Pick Folder Buttons (the [...] Buttons next to Edit boxes) in order to enter a folder in some fields. Useful at least in the new Real-Time Duplicate Search engine: http://newsgroup.xnview.com/viewtopic.php?f=60&t=28396

- The possibility to detect and relocate missing folders (right click 'Relocate...' etc.). A crucial feature. When a folder is deleted/moved/renamed outside of XnViewMP to provide a simple way to detect if the folder is missing and to relocate it manually. Mind you, now if a cataloged folder with stars, colors, keywords etc. is renamed/moved outside of XnViewMP the entire work is lost because the user simply cannot access it from inside of XnView! (details on request)

- The possibility of finding and relocate automatically the moved/renamed folders. Eg. the folders from thumb USB drivers, external disks etc. There is a simple trick which can be used in order to solve this. No, it isn't the disk's serial number/label because this solution doesn't cover the case in which one moves the c:\foo\blah to d:\bar\baz. (details upon request)

...as you see in the ASP example above - and the same thing is present in Lr, Picasa, IDImager & Photo Supreme - the Catalog is so important that they have it in a pane in the main form (usually located in the place in which we have the Categories Tree). However I think that having an always-open Catalog can lead to slowdowns since the program must update in parallel this pane.

I'm not a database expert... noooo ways... switchable databases sounds good to me, which could speed up work for diverse projects?? switching users?

but for me I just need the ability to sandbox completely any particular folder so that mad amounts of stupid iptc keywords will not get added to the Categories list just by browsing a few images I downloaded from the web!
Build Debian http://dquinton.github.io/debian-install/
Top

orbspider wrote:I'm not a database expert... noooo ways... switchable databases sounds good to me, which could speed up work for diverse projects?? switching users?

but for me I just need the ability to sandbox completely any particular folder so that mad amounts of stupid iptc keywords will not get added to the Categories list just by browsing a few images I downloaded from the web!

Yes, one the usages is this. We discussed this here in the past enough times. Most probably our librarian

will jump in with a bunch of links on the theme.

m.Th. wrote:We discussed this here in the past enough times. Most probably our librarian

will jump in with a bunch of links on the theme.

I'm having a hard time keeping up with you, my friend

Please let me know if you want me to refine the list.
Top

Another advantage of tree structure is that one can remove the entire branch from the catalog if he doesn't want to have it anymore because of various reasons. Now we are forced to delete from catalog all the entries one by one. And if the branch was big then is a royal pain to do it.

...btw, when we'll add to the Catalog the much more intuitive (now) buttons 'Delete' and 'Delete All...' - in which the user will see visually that it will remove from Catalog the entire branch if he wants to - it is much better to rename them to 'Remove...' and 'Remove All...'.
m. Th.